Korea’s Ministry of Trade, Industry and Energy (the “MOTIE”) unveiled two crucial long-term energy policy plans in the waning days of 2020.  The 9th Basic Plan on Supply and Demand of Electricity and the 5th Basic Plan for New & Renewable Energy, each made public on December 29, 2020 (together, the “New Master Plans”), provide some long-awaited additional clarity on how Korea’s primary energy regulator intends to manage the nation’s energy transition from its current reliance on fossil fuel to achieve carbon neutrality by the year 2050.

9th Basic Plan on Supply and Demand of Electricity

Korea’s Electricity Business Act stipulates that the MOTIE will issue a Basic Plan on Supply and Demand of Electricity (the “S&D Basic Plan”) every two years to establish the basic direction of electricity supply, long-term forecasts, supply plan of generation facilities and major transmission/distribution facilities, a management plan for electricity demand, and related issues to provide stable supply of electricity over a fifteen year period.  The S&D Basic Plan also includes a listing of power projects deemed strategically important and hence eligible for a streamlined permitting process pursuant to the Electric Power Source Development Promotion Act.

The previous 8th S&D Basic Plan (covering the period between 2017 and 2031) was issued December 29, 2017, and hence the 9th S&D Basic Plan (from years 2020 to 2034) had initially been expected to be released in December 2019.1  December 2017 was a momentous year for Korean energy policy; in the same month the MOTIE announced the “Implementation Plan for Renewable Energy 3020” to achieve a target of 20% of the national energy portfolio from new and renewable energy sources by 2030 (a target subsequently increased and extended to 30-35% by 2040).

The 9th S&D Basic Plan reaffirms the government’s will to:

The following table sets out changes in generation capacity by power source as projected by the 9th S&D Basic Plan. 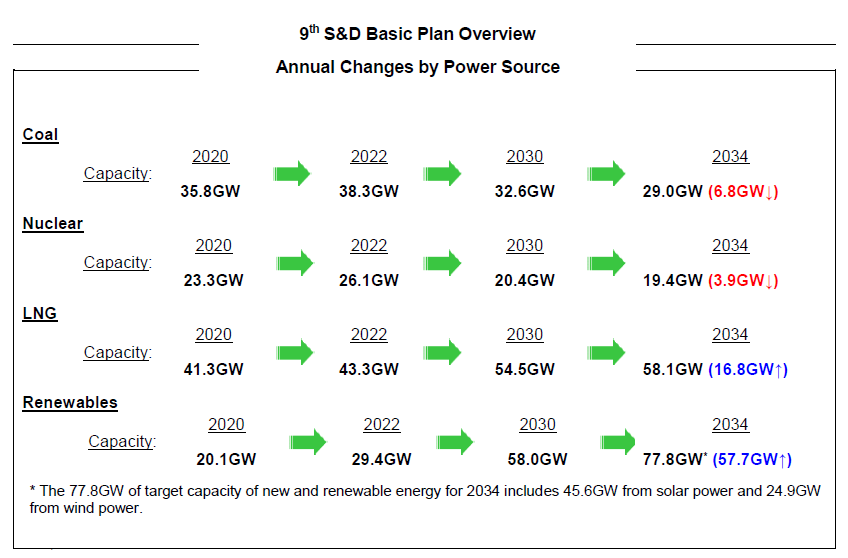 The Act on the Promotion of the Development, Use and Distribution of New and Renewable Energy requires the MOTIE to announce a Basic Plan for New and Renewable Energy (the “RE Basic Plan”) every five years.  The RE Basic Plan includes energy portfolio targets, measures to reduce greenhouse gas, methods to evaluate technology standards, and related issues for purposes of encouraging technology development and use of new and renewable energy.

The previous 4th RE Basic Plan (covering years 2014 to 2035) was issued in 2014, which means that the most recent 5th RE Basic Plan is the first RE Basic Plan to take into account the current Moon Administration’s heightened emphasis on the importance of renewables in Korea’s overall energy strategy.

The 5th RE Basic Plan (covering years 2020 to 2034) proposes the following five initiatives:

As to the improvement of the market system, the 5th RE Basic Plan calls for (i) further transition of the RPS system to reliance on long-term contracts (as opposed to the spot-market), (ii) creating more demand for new and renewable energy, (iii) adjustment of multipliers for renewable energy certificates (“RECs”) and (iv) carving out green hydrogen from the existing RPS system (and establishing a separate “hydrogen portfolio standard” incentive scheme).

The 5th RE Basic Plan also emphasizes an increasing role for local governments (including delegation to local governments of profit-sharing schemes for certain community-led renewable energy projects) and notes that the government plans to support domestic technological developments in next-generation photovoltaic materials and core components of large-scale wind power projects.  The government also announced its intent to increase the stability of the national grid to account for expected volatility as renewables penetration increases and to explore ways to expand the use of green hydrogen in transportation, power generation, industrial processes and other sectors.

In particular, to encourage more demand for renewables power generation, the MOTIE will consider:

In addition, the 5th RE Basic Plan states that purchase of new and renewable energy via RE100 implementation methods (e.g., green pricing, indirect PPAs, and REC purchase) will be enabled beginning in 2021 and that the introduction of direct PPAs is also being considered.  The government mentioned that it will introduce incentives or other ways to encourage domestic RE100 participation.

Together with the Basic Energy Plan (the comprehensive long-term plan issued by the MOTIE every five years that systematically links all other energy-related plans and sets forth the direction of energy regulations), the New Master Plans form the bedrock of Korea’s long-term policy in relation to renewable energy.

Although not legally binding, prior versions of similar long-term policy plans have offered a roadmap for regulatory policy across successive administrations.

The New Master Plans’ delineation of an accelerated roadmap to phase-out Korea’s reliance on coal and nuclear power and their call to strengthen the RPS system to further catalyze the supply of and demand for renewables increases the likelihood that the recent “green shift” in Korean energy policy will enjoy consistency over the long-term.

1  The delay appears to have been at least partially attributable to a push from newly-elected environmental experts in the National Assembly to completely eliminate domestic coal-fired power generation by 2040, although this ambitious goal was ultimately not reflected in the final 9th S&D Basic Plan.